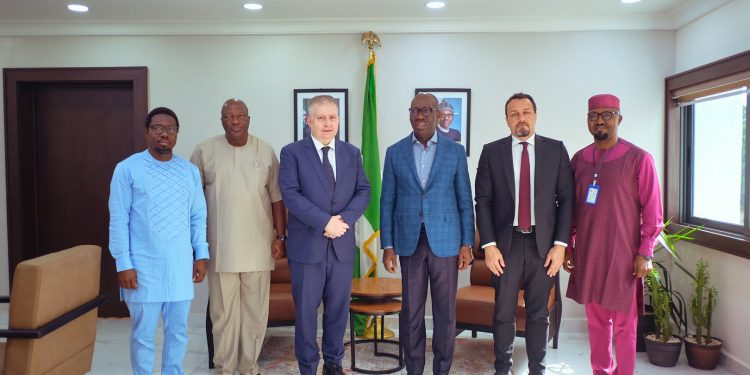 Obaseki disclosed this when he received the Italian Ambassador to Nigeria, Stefano De Leo, who was on a courtesy visit at the Government House, Benin City.

The governor, who hailed the Italian government for their support, said the collaboration between Edo and Italy translated into the huge success recorded in the fight against the scourge.

He noted, “We feel very special that your first visit outside Abuja is to Edo. This emphasizes the special relationship that Edo State, as a sub-national, and the Italian government enjoys. We have had a long-standing relationship as you pointed out and are very glad that, under your leadership, we are hitting the ground running.”

Obaseki continued: “As you know, we are currently working on a lot of initiatives with the federal government and the Italian authorities, and this derives from what we have done in the past.  In the past five years, we have been working with the Italian authorities and have been able to significantly limit and reduce the incidents of irregular migration and human trafficking in Edo.

“Migration has become a global phenomenon; you cannot stop it, but can only manage it. Our people love to travel; many have established and they are doing well, which serves as an impetus for many more who want to go.

“But we have to regulate that process. That is where we would be discussing with you and the federal authorities. The conversation has started on the new structure for our response to migration; we call it migration 2.0.”

According to him, “Here, we are saying that in addition to what have been doing in the last five years, which is first to resettle those who want to come back home and integrate them into the society, as well as try to deal with the root causes of migration so that we can reduce the number of people who want to migrate as migration is linked to development.”

The governor further noted, “In this new policy, we want to amend our laws on human trafficking and irregular migration and in addition, try to put in pathways for regular migration. We should move from migration to trade and investment.

“We are creating the enabling environment for businesses to thrive in Edo State. Whatever businesses they are doing there, there is really no reason why they cannot bring some of the capital back home.”

Earlier, the Italian Ambassador, who reassured the continuous support of the Italian government, hailed the governor’s efforts in the fight against human trafficking and irregular migration.

He noted, “Global migration is a phenomenon that is unstoppable. This visit is another opportunity to look at it as a game-changer and fully share your vision and outline how we can work together, starting from the work you did in the fight against human trafficking.

“Now, it’s time to look at the migration clause that is legal and then create opportunities to attract investments from Europe, especially from Italy. I think these are the common ground on which we can work together.”