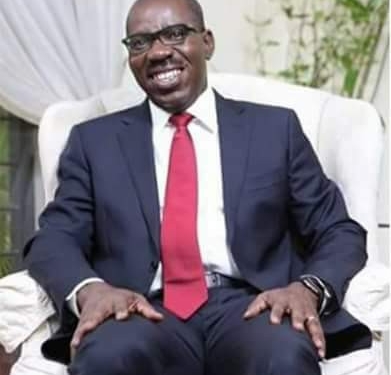 Edo State Governor, Mr. Godwin Obaseki has said his government is collaborating with Information Communication Technology (ICT) firms to improve on the technology used for revenue collection in the state in order to block leakages.

Obaseki disclosed this when he met with executive members of the Edo State Motorcycles and Tricycles Union under the aegis of ANNEWATT who were on a courtesy visit at the Government House, Benin City.

The governor who hailed the group for their support towards to the growth and development of the state, noted: “I chair the Joint Account Allocation Committee (JAAC) and get the report monthly and I ask questions about the process of revenue correction and adherence with laid down rules. I am happy I have a partner in you in deployment of technology for revenue collection.

Obaseki continued: “We are in discussion with technology partners to improve on the technology for revenue collection such that I will request for the net figures and from the gross, your payment should be made to you directly.

“What I want to see in my JAAC report is the net that comes to the government. Whatever has been agreed with the Union should be automatically transferred to their account monthly.

“We have to work together to get the full value of our efforts. You voted for us and put us in office and not any godfather. The bad characters in our revenue collection in the state have been put to rest. That was the battle we fought. Through their votes, the people have permanently displaced people, who profiteer from our revenue collection system.

“We want to incorporate you into the security architecture of our state, commencing this Christmas period. You are everywhere and carry people around; we will be collaborating with you to help in securing our state. The rate of crime in the state is unacceptable and needs to be checked and controlled.”

Earlier, the State Secretary of ANNEWATT, Daniel Osiaga thanked the governor for harmonizing the Unions, thereby restoring dignity in their profession since 2017, noting that they are no longer seen as irresponsible people in the society.

He said before the Obaseki-led administration, the system of revenue collection was dehumanizing, adding “sanity and respect has been restored through harmonization of the unions.

“We have 622 revenue enforcers and monitors posted across the 18 local government areas of the state and are paid monthly by the Union.

“The system is beautiful and we want it to continue. However, what you designed is not what is in operation.”