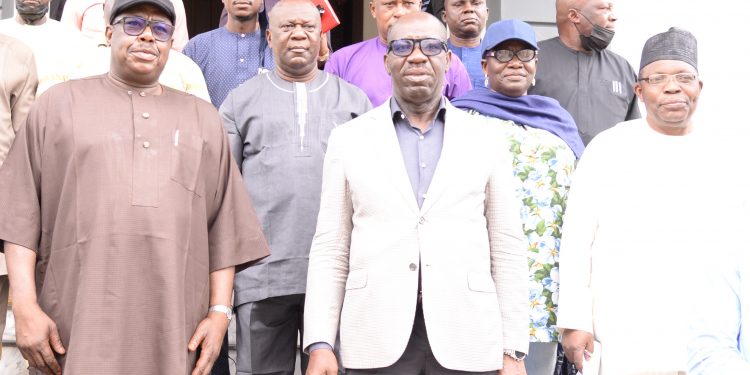 Edo State Governor, Mr. Godwin Obaseki, has charged governments at all levels to prioritise agriculture and adequately harness the untapped potentials of the sector to fast-track economic growth and development.

Obaseki stated this when he received the Minister of State for Agriculture and Rural Development, Hon. Mustapha Baba Shehuri, who was on a courtesy visit to the Government House, Benin City.

The governor noted: “We want to thank your Ministry for the collaboration that we have enjoyed. You know that Edo is very uniquely positioned as you have said, especially in the area of tree crops.

“We have the benefit of hosting two Federal Government research institutes in the area of rubber and cocoa. For us, we are moving agriculture back to what it should be; not as social service, but as a business. We understand that our future lies more in agriculture.

“Yes, we have oil and gas; we were better off when we relied solely on agriculture in the 1950s and 60s. So, what we have done as a state is to find how we can intervene and change the paradigm.

He continued: “I am pleased to assure you that if you apply for land today in Edo for residential purposes or agriculture, within 60 days, your C of O will be ready. We have also come to the realization that the key to agriculture is manpower and research.

“We are taking advantage of some federal government programmes particularly the scheme promoted by the Central Bank of Nigeria. We also have a programme called the Edo State Oil Palm Production Programme, where we are putting almost a hundred thousand hectares of land for production of oil palm.”

“We would like to see a federal government that is talking to itself and talking to us; we must re-examine how we engage in the area of agriculture with our people,” he added.

Earlier, Shehuri noted, “I am aware of the potentials of Edo State in the production of rice, cassava and maize. Edo State is a clear leader in palm oil and rubber production and of recent the coca production in the state has come up to rival other states.”

He further commended the governor for focusing on agriculture and providing rural development to support communities in the state, noting that the federal government is very much aware of all his agricultural programmes in the state.

Osunde congratulates Obaseki for victory at Court of Appeal