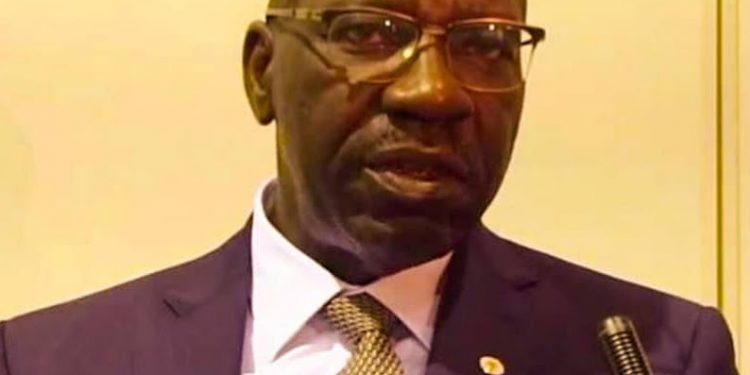 Edo State Governor, Godwin Obaseki, on Sunday morning disclosed that the state government will henceforth go after traditional rulers who let out grazing land to undesirable elements in their community without checking their background, an act that is contrary to the government policies and directives.

He made the disclosure while on a visit to the state Police Command Clinic to emphatise with rescued victims of the Igueben train station kidnapping incident of about a week ago.

The governor said: “We thank God  that we have been able to secure the release of almost all the people that were abducted last week at Igueben train station by bandits in Edo State.

“It has been a gruelling experience, something we never prayed for, something we hope never to happen again. We have tested the will of our security forces and I am so glad that the system we have in place is resilient.

“You can see that within the last one week, we have been on the trail of the kidnappers and we contained the kidnappers within the area  and they could not leave the area and with all the intelligence and the area support we got from the Police and the technology support, we were able to track them and with the training of the special forces we have, and with the support of all the other members of the forces we put together, we were able to secure the release of 12 out of the 14 that were being held hostage unharmed and we think it is worth something celebrating, something we should thank and appreciate members of our security forces for, for the sacrifices they put in.

“I must also express our disappointment at the authorities of the Railway Corporation because after the Kaduna incident, one would have expected that they would have secured their facilities better. So, for six men to have entered and kidnapped about 30 people is something I think should be investigated. It does not speak well of their preparedness to run a safe and efficient rail transport system in the country and it does not give Nigerians the confidence to use that mode of transportation.

“You can not tell me that that facility at Igueben train Station has only one policeman with a riffle guiding that facility particularly after what happened in Kaduna.

“I believe this agency knows what it is doing and should therefore investigate what happened to ensure that this kind of thing does not happen to any Nigerian anywhere in this country.

“We are working and consulting with the Commissioner of Police and with the service chiefs  because we have information that some traditional rulers particularly in that area are not respecting government decisions to make sure that grazing land are not given to herders in their forests.

“I have instructed that those traditional rulers be investigated and anyone of them that is found to be harbouring people they should not harbour in their domain will have questions to answer because in communities that have cooperated, we are not having this kind of incidents.

“There was no money or ransome paid to secure the release of the abducted victims because the special forces went into the forest and overpowered the kidnappers who ran away with only two of their victims and they left the rest and the special forces and members of the security team, the military, the Police, the DSS and the vigilantes and hunters to secure the twelve abducted victims that were brought to this hospital.”

The Edo State Commissioner of Police (CP) Mohammed Dankwara said the victims were rescued in Udo Forest in Ugboha in Esan South East Local Government Area of the State.

“Our men in collaboration with other security forces have been in the forest for a week now and it was there they intercepted those people because from the intelligence gathered, the kidnappers and the victims were roaming that area.

“So, yesterday night, the security forces laid an ambush and in trying to move the victims from one area to the other, the security forces intercepted them. So, that was exactly what happened. As I speak with you, we are making progress to make sure the other two victims are released unhurt,” Dankwara stated.

He said there was no casualty in the operation as the kidnappers took to their heels stressing however that they have been able to arrest some members of the syndicate involved in the kidnapping operation.