Okpebholo, let us reason together 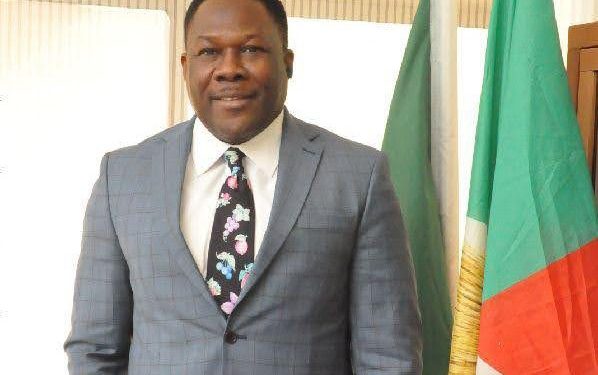 My good people of Esan West, Esan Central and Igueben Federal Constituency (Okpebholo) and the leaders of the All Progressives Congress (APC) in the Central Senatorial District of Edo State, I humbly and respectfully salute you.

This period in our political history is very vital in the sense that preparations are on top gear by the various political parties to contest the 2023 general elections so as to take over the control of the affairs of our great country, Nigeria.

By May 2023, the administration of President Muhammadu Buhari would have run a full circle of eight years, thereby giving room for another elections for a fresh government.

In Edo State, Esan West, Esan Central and Igueben Federal Constituency, which is my Constituency will also be involved in the general elections and this is where my focus is centered. The Federal Constituency comprises Esan West, Esan Central and Igueben Local Government Areas. This time around, it is of utmost importance that the leaders and other stakeholders of our party (APC) settle down to take a critical look at the various aspirants who will later be candidates vying to represent us. This has become imperative because the people of the federal
constituency have suffered a lot of neglect and abandonment for the simple fact that some of those that have represented us in the past and those representing us now have either deliberately decided to do so (abandon us) or they do not know the rudiments of providing the dividends of democracy to the people who elected them. During campaigns, series of promises are made to the people and at the end, these promises are never fufilled. What the people get as dividends of democracy are the blasting of sirens to harass and intimidate them, giving of paltry sums of money, distribution of items like Wheelbarrows, wheelchairs, sewing machines, grinding machines, tricycles popularly known as Keke-Napep, motor bikes, six yards of wrapper (clothes), bags of rice and salt, all in the name of constituency empowerment.

The truth is that all these items are purely provided by the federal government, but routed through the honourable members and the senators to their respective constituencies and senatorial districts. So, when a member or a senator distributes such items as mentioned above and claimed them to be part of their empowerment to the people, please take notice that he or she is telling lies from the pit of hell and deceiving us.

It is saddening to know that when they fail to fulfill their electioneering campaign promises, they defend themselves by telling us that the primary function of the legislature is the making of laws. If they know that, that is their primary function, why promise heaven and earth during campaigns?

My dear people of Okpebholo, the time of deceit, vague promises, harassment, intimidation and disloyalty to the people and the political leaders of our constituency should be checked now.

Secondly, I want my party (APC) to use the eagle eye to look at the political development especially in Esan West, Esan Central and Igueben federal constituency since 1999.

Therefore, it will not be out of place morally and politically for our party (APC) to give Igueben Local Government Area the opportunity to produce the candidates for the 2023  National Assembly elections especially for the House of Representatives. After all, it is said that what is good for the goose is also good for the gander. Therefore, I am using this medium to appeal to the leaders and other stakeholders of our party to do the needful by giving Igueben the ample opportunity to field the candidate for the House of Representatives, Esan West, Esan Central and Igueben Federal Constituency in 2023.

Our son and brother, Honourable (Barr.) Kenneth Okoruwa Ihensekhien, has reached us in-house about his intension to vie for the House of Representatives ticket in 2023. Plans are already in place for him to formally declare his aspirations to the leaders and stakeholders of the party in our Federal Constituency in particular and Edo State at large. The people of Igueben Local Government Area inspite of political divides have received the good news of Ken’s ambition and they are already waiting anxiously for the formal declaration.

Honourable Ken Ihensekhien is a household name in Edo politics and beyond. But for the avoidance of doubt for those who might not know him deeply, I produce below his profile.

He had his primary education at Holy Cross Cathedral, Mission Road, Benin City and secondary school education at St. Patricks’College, Asaba, Delta State. He did Basic Studies at the College of Preliminary Studies, Yola, Adamawa State.

He gained admission to the University of Lagos (Unilag) to read Philosophy and graduated with a Bachelor of Arts Degree (B.A. Honours).
Towing his father’s prowess in Law, he sought admission to Edo State University, Ekpoma now known as Ambrose Alli University, Ekpoma to read Law and he added LL.B Honours to his educational pursuit. He went to Nigeria Law School, Lagos where he came out Barrister at Law (BL), Second Class Honours, Upper Division.

Honourable Kenneth Okoruwa Ihensekhien has always had a flare for politics from his childhood and decided from then that one day, he would engage in political activities to be able to help his people with the basic necessities of life. This vision took him back to University of Lagos to read Political Science and got a Masters Degree (M.Sc). He is currently a Doctoral candidate (Ph.D) in International Relations, University of Benin, Edo State.

He ventured into politics in 1998 and he was elected to the House of Representatives on the platform of United Nigeria Congress Party (UNCP), but the inauguration was truncated by the military junta.

In 1999, he contested and won the election to represent Igueben Constituency in the Edo State House of Assembly on the platform of All People’s Party (APP) and he was elevated to the position of the Minority Leader in the House dominated by the People’s Democratic Party (PDP). It is on record that the bill that has ever attracted the widest acceptance and jubilations by the people of Edo State was the one changing or renaming Edo State University, Ekpoma to Ambrose Alli University, Ekpoma and the bill was sponsored by Honourable Ken Ihensekhien.

Hon. Ihensekhien joined the Action Congress of Nigeria (ACN) in 2010 which later merged with the Congress for Progressive Change (CPC) and All Nigeria People’s  Party ( ANPP) to form the present All Progressives Congress (APC) and he served as a member of the Constitution Drafting Committee at the APC National Convention, Abuja in 2014.

He was appointed a civil commissioner for Youths and Sports by the former Governor of Edo State, Chief Lucky Igbinedion in 2003. During his commissionership, he took Edo State Sports endeavours to enviable heights. He was the Chairman, 2004 National Sports Festival Organizing Committee, Edo State chapter. He led Edo State delegation to 2004 National Sports Festival in Abuja and also led Edo State delegation to 2004 Olympics Games in Athens, Greece.

In 2005, as a result of his awesome performances in the Ministry of Youths and Sports, he was again appointed a civil commissioner and deployed to the Ministry of Energy and Water Resources. In his usual performing wands, he immediately engaged in the reformation of the Energy and Water sectors. He initiated and personally supervised the rural electrification projects in Edo communities. He completed and commissioned 25 rural electrification projects in Edo State including Amahor and Ugun in Igueben Local Government Area. He distributed 142 transformers to the three Senatorial Districts of Edo State. Ebelle, Igueben, Amahor, Ugun and Ewossa were among the beneficiaries.

In 2007, he was yet appointed a civil commissioner for the Ministry of Agriculture and Natural Resources. He did wonderfully well also. He initiated and supervised the development of state farm in each of the senatorial district in Edo State. He assisted farmers with agricultural machines, farm implements and fertilizers which attracted the World Bank and International Fund for Agricultural Development (IFAD) and this led to the resuscitation of some programmes like the Community Based Natural Resources Management Programmes (CBNRP); National Fadama 111, Cassava Mosaic Disease Programme among others.

In 2013, Honourable Ken Ihensekhien was called once more to service for his people. He was appointed as the Special Adviser to the former Governor of Edo State, Comrade Adams Oshiomhole on Project Monitoring, the Deputy Chief of Staff to Governor Adams Oshiomhole on Political Matters (2015) and the Principal Private Secretary to  Comrade Adams Oshiomhole as the National Chairman of the All Progressives  Congress (APC 2018 – 2020)
He had been a National Delegate to the National Convention of APC in 2014, 2018, 2019 and 2022 in Lagos and Abuja respectively.
He has also attended many professional courses too numerous to mention here.

As a result of his monumental contributions to  Edo State communities, some traditional rulers found him worthy of honour to appreciate him. He was therefore honoured with chieftaincy titles of, the Ode of Okalo (January 2001), The Eni of Opoji (August 2002),The Eni of Ewu (August 2005), The Uki of Amahor (December 2005) and The Osisafe of Somorika (January 2006) by the  traditional rulers of the respective kingdoms.

Honourable (Barr.) Kenneth Okoruwa Ihensekhien is a devout Christian. His hobbies are Swimming, Cycling and Reading.
He is happily married with children.

My leaders and stakeholders of our party, from the above profile of Honourable Ken Ihensekhien, you will agree with me that he is qualified and competent to represent us at the House of Representatives. I therefore once more call on you to give him the opportunity to serve.
God bless our party, APC, God bless Esanland, God bless Edo State and God bless Nigeria.

2023: I will create wealth for Nigerians, says Peter Obi

2023: I will create wealth for Nigerians, says Peter Obi