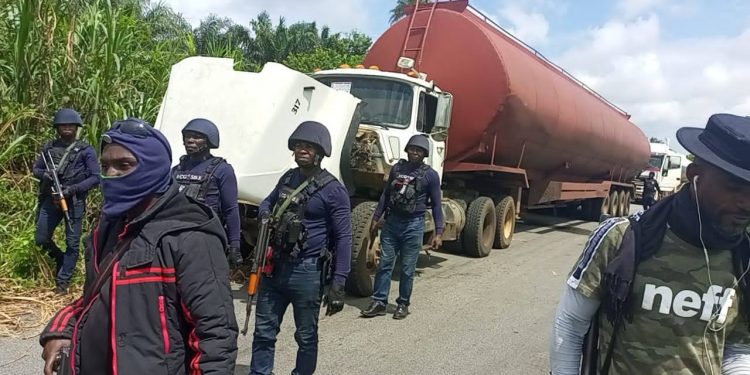 Delta State Command of the National Security and Civil Defence Corps(NSCDC) through a statement by its Public Relations Officer (PRO) DSC Emeka Peters Okwechime has disclosed how its operatives burst a bunkering gang.

According to Okwechime, “acting on a credible intelligence information, men of the Commandant General Special Intelligence Squad(CG SIS) has burst a loading point in Odorubu Waterside in Patani Local Government Area of Delta State were about six tankers and articulated trucks loaded with stolen and illegally refined petroleum products suspected to be automated gasoline oil (AGO) was impounded.

“In a determined effort to gain access into the loading point, men of the C.G.S.I.S engaged the services of about six truck drivers, two auto electricians and a tow truck, which towed away the heavily loaded 120liters capacity truck used by the crude oil thieves to barricade the road leading to illegal loading point.

“Also in a related development, barely 24hours of arrival, men of the CGSIS have arrested four suspects in Warri with a Toyota Camry blue coloured car with Registration Number BMA 786 TN and a Toyota Sienna with Registration Number KSF 107 CD. Both of them were loaded with illegally refined petroleum products suspected to be AGO concealed in 25liter polythene sacks numbering about 300 sacks.

“The suspects are Clement Mike, Tobore Morgan, Jeff Oluchi at large and Chinwe Ikpeamachukwu. They are currently undergoing investigation and will be charged to court accordingly to serve as deterrent to others.”

An advocate for the devil: Kassim Afegbua & his new job for Tinubu

Bola Ahmed Tinubu: The President Nigeria does not need

Bola Ahmed Tinubu: The President Nigeria does not need