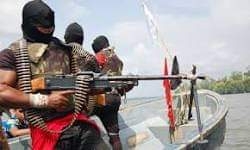 Reformed Niger Delta Avengers (RNDA) have stated that it has backed out of the ongoing peace talk with the Federal Government on the non-volatile approach to issues of the continuous operations of oil and gas facilities, warning foreign oil vessels to stay away from the Niger Delta region or face dire consequences.

In a statement issued by its national coordinator, Johnmark Ezon Ebi, and made available to Popular News, the group said: “The peace talk between the RNDA and the Federal Government, which was initiated last year by the Deputy Senate President, Senator Ovie Omo-Agege, was recently threatened by the appointment of Mr Akwa Effiong Okon as sole administrator of the Niger Delta Development Commission (NDDC)and the non-recognition of the Niger Delta region in the policy statements made by President Muhammadu Buhari during his new year day, January 1st, 2021, broadcast to the nation.”

The militant group threatened that with effect from Thursday, January 7th, 2021, its strike force units in the nine states of the region will kick start bombing and destruction of oil facilities, oil pipelines, major oil ships and vessels coming from Lagos to the creeks of the Niger Delta.

According to the group, ”the major vessels and ships are advised to withdraw their services to Warri Escravos Waters, Bonny NLNG, Port Harcourt Waters from the Gulf of Guinea to Nigeria Water ways should stop their services henceforth and any of the ships and vessels that refuse to comply with our directive will meet with the fire power attack from the dreaded strike force units of the RNDA militant groups.”

Going further, the group disclosed that the operation is code named “Operation No Mercy Alfa Piper Zero Oil” to save NDDC from the hands of politicians including the Minister of the Niger Delta Affairs, Senator Godswill Akpabio, the sole administrator, Mr. Akwa Effiong Okon and some Presidential aides involved in the plot to hold the Niger Delta to ransom.

The militant group however commended the efforts of the Deputy Senate President, Chief Ovie Omo Agege, in rallying round all stakeholders in the region including traditional rulers, the leadership of HOSTCOM and the various agitating militant groups in the region for building  bridge of peace among all ethnic nationalities in the region, “we commend those genuinely agitating for the practical development of the region and salute the neglected emancipated long suffering and most oppressed citizens of Nigerian state who are from the oil rich region of Niger Delta.

“Even though the Commander-In-Chief, President Muhammadu Buhari, refuse to acknowledge that the most significant region in this country, that has been the sustainability of the economy of this nation for all this years, should be given proper attention before any other region or sector in this year 2021 while he was addressing the nation in his new year address.

“We, the dreaded Strike Force Unit commanders of the RNDA, who are genuinely agitating for the overall development of the region, will not take such from Mr.President, because without the daily production of crude oil in the creeks of Niger Delta region there will be no Nigeria.

“And the RNDA make bold to state that without the constant high volume of crude oil production in the creeks today the economy of this country will be in comatose and therefore we want to state clearly that the people of the oil rich region whose wealth of crude oil is used to develop Abuja and the northern part of the country will not fold our hands and tolerate such from the federal government any longer.

“The fact that Mr. President kept quiet and refuse to take any action on the inauguration of a substantive NDDC board which had been screened and confirmed by Mr President himself before now, and for him to keep quiet and allow his aides around him to plot a coup against the people of the Niger Delta region.

“He has also allowed Senator Goodwill Akpabio and his corrupt cronies to hold the Niger Delta to ransom for refusing to swear in the already screened substantive board for over two years and for the fact that Mr President refuse to make any comment and issue any statement for keeping mute in respect of all the agitations from the various stakeholders, TROMPCON, Governor’s from the entire nine Niger Delta States, clergy men from the region, various youth groups, the likes of Ijaw Youth Council(IYC), stakeholders and various agitating militant groups in the Niger Delta, is a clear show of disregard to the people of the region.

“It is also a clear affront, disregard and insult to the people of the region by President Muhammadu Buhari to have allowed such illegality announced by his media aide, Mr Femi Adesina on the name of Mr Akwa Effiong Okon as the sole administrator of NDDC. Even though such illegality was perpetuated during his absence from the Villa and in Daura, Katsina State, his refusal to reverse such and sanction those involved is an action not known to the national assembly that gives birth to the creation of the NDDC in 2000.

“The only solution to the issue on ground is for President Muhammadu Buhari to listen to the clarion call and agitations of the Niger Delta people. The RNDA have decided to declare war against the oil facilities and to blow up all the major oil pipelines and to attack all the oil vessels entering Nigeria waters that is bringing in NNPC fuel tankers to the Lagos high sea and for this reason the RNDA militant group has declared curfew with the expiration date of 21 days in the entire Nigerian water ways from the Lagos sea atlas cove manifold, NLNG Bonny waters to the gulf coast of Guinea to Nigeria waters.

“Any foreign vessels that refuse to obey this directive from the RNDA is on its own and whatever that happens to any of the vessels and the foreigners  the vessels owners should hold Senator Godswill Akpabio, the Minister of Niger Delta Affair and Mr Akwa Effiong Okon responsible.

“Mr President should not hold the RNDA responsible because a word is enough for the wise and we can no longer tolarate the perpetual injustice and the bunch of oppression melted by Mr Akpabio and the aides of Mr President in the villa to plot a coup of vendetta against the people of the oil rich Niger Delta region.

“And in addition the RNDA will not fold its arms and allow Senator Akpabio and his corrupt cronies in the Villa to hold the Niger Delta to ransom.”