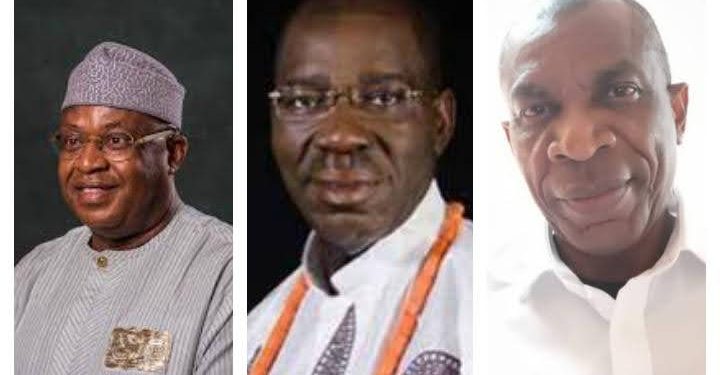 As part of the healing process, with a view to avert a possible crushing defeat in the forthcoming elections, similar to what the party suffered in the just concluded Ekiti State Governorship Election, leaders of the Edo State chapter of the party have decided to close ranks and forge a united front.

Luckily, the state governor, Mr. Godwin Obaseki, is behind the fresh moves to unite the feuding factions in the state as a guarantee of electoral victory. Though the peace search may still be in its infancy, pundits have, however, predicted a good outcome if the process is allowed to run its full course.

They have also hailed the state governor who, by his position as the leader of the party, for taking the bull by the horn to initiate a round table discussion involving all the aggrieved factions, stressing that the move is a welcome one and urging the other side to embrace the move, for the sake of making the PDP great again.

Gathering at the Benin City secretariat of the party from across the three senatorial districts of the state, the PDP leaders, looking genuinely sober as a result of recent developments in the party, appeared finally ready to give peace a chance. The prime mover of the peace search, Governor Obaseki was in a reconciliatory mode.

Both in his utterances and dispositions at the “reconciliatory meeting”, it was obvious the governor’s sole agenda was to promote “genuine reconciliation and forge a united front.”

Repeatedly in his address to the party leaders and members who were present at the “peace parley”, the governor refrained from blaming any side for the crisis rocking the party and instead harped on why the feuding factions must sheath the sword and embrace peace.

As a way of ensuring that the reconciliation did not suffer a setback, the party stakeholders, political observers say, should developed a time-tested way of resolving disputes in a “family manner.”

Based on findings, the PDP in the Ekiti election, performed woefully due to the lack of unity among the party faithfuls. The Ekiti episode is a signal that  there is an urgent need for the PDP to rebrand, reinvent and reconnect with the youths if it still wants to be relevant in a fast-changing political environment.

The Edo PDP stakeholders should not get complacent and remove their eyes from the bigger picture, the opposition party is gearing to “grab” back power if the PDP fails to put its house in order. It will be tantamount to a “catastrophe of an unimaginable proportion” if the party concedes ground to the APC in both the forthcoming state and national assembly elections.

The PDP family in the state will shout for joy to have the full complement of the state governor, Mr. Godwin Obaseki, State Party Chairman, Dr. Tony Aziegbemi, the two PDP Senators and Chief Dan Orbih among others, leading the party’s campaign during the Presidential and National Assembly elections to ultimately sweep the polls, leaving the APC high and dry.

Indeed, if the PDP succeeds in patching the internal strife and goes into the 2023 general elections as a united front, the opposition APC will be wondering what exactly hit it.