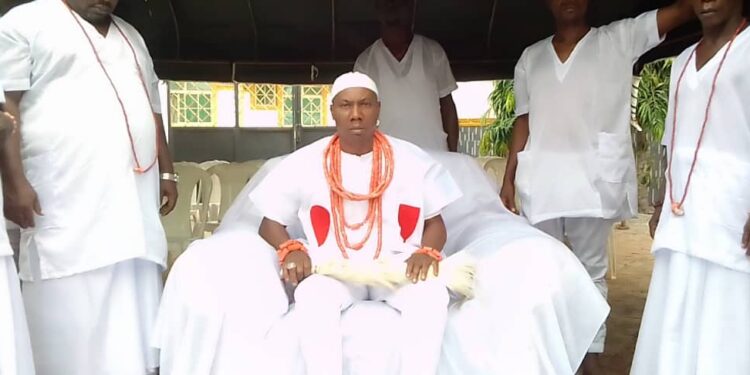 His Royal Highness Henry Ekebilegha Binidodogha, the Ojuaga 1 of Egbema Clan in Ovia South West Local Government Area of Edo State has reiterated that his ascension of the traditional stool since March 25th, 2018, has the endorsement of all the kingmakers in the locality.

He said that the objection to his emergence is coming from outside the state mainly from neighbouring Delta State where he alleged that some elements have been fuelling illfeelings against him because they are of the opinion that his open show of allegiance to the Benin Monarch, His Royal Majesty, Omo N’Oba N’Edo Uku Akpolokpolo, Oba Ewuare II is enslavement of the Ijaws.

“They obviously do not know how the Ojuaga title came about. They should come to be educated on how the title came to be. I stand for peace, progress and development of my communities here in Edo State,” he stated.

“They are hirelings mainly from Delta State who take delight in invading our communities in Edo State for flimsy reasons. We have reported their nonchalant behaviour to the AIG Zone 5, Benin, but they have refused to take heed despite the intervention of the police.

“Rather, they keep doing worst things on a daily basis as they have constituted themselves into brigandage. They are poking their nose into what they know next to nothing about and infact does not concern them.

“The Ojuaga title for their information is not hereditary. It is rotational and it is coined from the first letter of the names of the seven communities that make up Egbema Clan in Ovia South West Local Government Area of Edo State namely Ofunama, Jamagie 1 and 2, Ugbolukanga, Abere, Gbeoba and Ajakurama respectively.

“Their argument is that we are paying reverence to the Oba of Benin, Omo N’Oba N’Edo Uku Akpolokpolo, Oba Ewuare II and so we are enslaving them. We have told the police at the AIG Zone 5, Benin about their rabble rousing nature and all attempts to put them in check has been repelled as they blatantly refuse to adhere to the terms of a peace agreement we both signed. To the extent that they have refused to attend any meeting called by the police to adjudicate in the matter.

“They have threatened to cause mayhem in Edo State. This information we have also made available to the police as we are lovers of peace not war mongers like them.”

Benin jailbreaks: Edo govt  places reward of up to N250,000 for information leading to rearrest of escapee prisoners

Governance in Edo State has grinded to a halt, says APC

Governance in Edo State has grinded to a halt, says APC