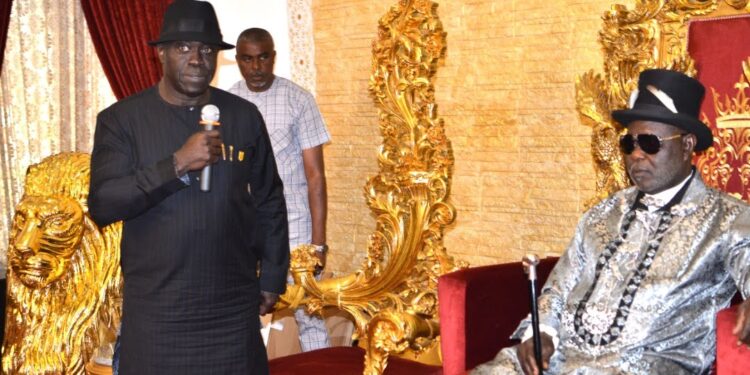 The new Interim Administrator of the Presidential Amnesty Programme (PAP), Maj. Gen. Barry Tariye Ndiomu (rtd) has assured Niger Delta ex-agitators that the federal government will fulfill its commitment to the letter regarding the on going Amnesty Programme.

Maj. Gen. Idiomu gave the hint on Friday when he visited the Amayanabo of Ancient Okochiri Kingdom, His Royal Majesty, Ateke Michael Tom (JP), (the Sekuro of Niger Delta) in his Palace at Okochiri Town, in Okirika Local Government Area of Rivers State, saying that the federal government will continue to count on the support and wisdom of the traditional rulers in the Niger Delta region in conducting the affairs of the Presidential programme.

The Interim Administrator said the purpose of his visit was to acquaint the king with the general policy direction of the federal government as regards the Presidential Amnesty Programme and to explore areas of cooperation to achieve the primary objectives of the programme, just as he said the federal government intends to transform the Presidential Amnesty Programme into something better in the future.

Maj. Gen. Idiomu, who earlier had a closed door meeting with HRM King Ateke Tom in his Palace before briefing newsmen, promised to take back the various observations and concerns earlier expressed by King Ateke Tom and stakeholders in the region concerning the ongoing Presidential Amnesty Programme to the appropriate authorities.

“We will go back to the authorities and let them know the reactions, but generally, the King is satisfied and he is ready to work with us to ensure that the intentions of government concerning the programme were fully actualized.

“The whole idea is to get them (ex-agitators) to understand the fact that first of all, the Presidential Amnesty Programme itself by name, is not intended to be an endless exercise. Originally you can recall that the programme was to terminate in 2015 but for certain reasons of exigencies it was extended beyond that date.

“We need to also educate them (ex-agitators) on the need to focus more on the fact that there could be a terminal date at some point and that we all need to work together so that we do not lose focus on the primary objectives of the scheme.

“I like to thank His Royal Majesty for this very warm reception. It is going to remain in our memories for a very long time. Thank you also for conducting us round your very beautiful Palace. Probably, the most beautiful Palace in Nigeria.

“Your Majesty, today begins a new relationship between your good self and the Presidential Amnesty Programme. We will continue to count on your support and wisdom in conducting our affairs, going forward.

“We have discussed a number of issues. We have also noted the reservations that you have expressed, which we in turn will work with and relay back to the appropriate authorities so that those fears you expressed can be addressed.

“Lastly, I want to say once again, thank you, and in consonance with our own culture, before we depart, we will like to leave with you a memorable gift for you to remember our visit to your kingdom. It is not made of gold, neither is it made of silver, but it is just a token that you will keep in a convenient corner of your Palace, so that whenever you look at it, you will remember our visit,” Maj. Gen. Ndiomu reiterated.

Responding, the Amayanabo of Ancient Okochiri Kingdom, HRM, King Ateke Michael assured the Interim Administrator of his maximum support to the federal government to ensure that the Presidential Amnesty Programme succeeds without any hitch.

King Ateke Tom added: “We can assure you of our cooperation, support and if possible, defence if the need be because you are one of our own. We will do all we can to make you succeed in your work and pray God take you back you safely to your office”.

“Tell Mr. President that the Niger Delta people are peace loving people and that we are going to support Nigeria to succeed. Please extend the good wish of His Majesty to Mr. President”, King Ateke Tom said.

The highpoint of the visit was the presentation of a plague to King Ateke Tom by Maj. Gen. Idiomu (rtd).

The Interim Administrator was accompanied on the visit by his senior aides.