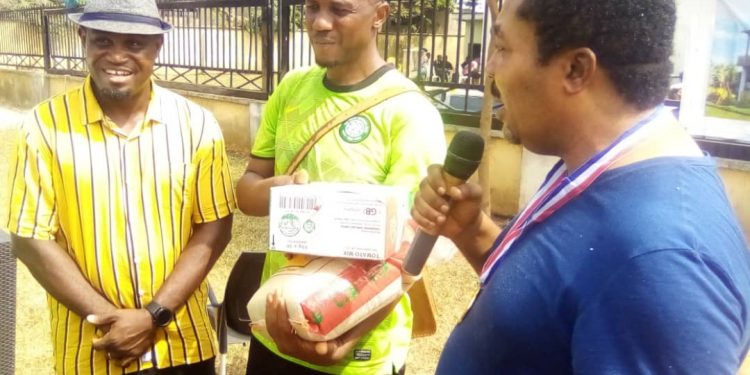 The Managing Director, St. Lawrence Clinic, Dr. Chibueze Tobechukwu, has appealed to Nigerians to always embark on a monthly regular check up to know the sugar level in their body to enable them know if their blood pressure is high or low for proper diagonsis and treatment.

Dr. Tobechukwu made the statements at the get together and end of year party/dinner organized by Immaculate Conception College Old Boys Association (ICCOBA), 1997 Set, Benin City, Edo State. He admonished the participants at the event to always check their blood pressure every month to enable them know if their blood pressure is high or low.

Dr. Chibueze disclosed that, people should cultivate the habit of checking their blood pressure every month. He explained that, high blood pressure is also known as silent killer. He posited that, between 140 over 90 optimal blood pressure means that it has high, which usually caused elevated blood pressure or hypertension.

The health expert added that blood pressure has a propensity of affecting every part of the body organs, also known as multi systemic diseases. He said heart, brain, liver, kidney and other parts of the body is at risk and stressed that, most of the complications that cause blood pressure are often silent.

He said, “if you are above 40 years it is vital for you to check your blood pressure regularly, at least once a month. This will help to avert early death. He listed some of the factors that can lead to high blood pressure as stress, excessive alcohol, excessive salt, diabetes.

He said physical, emotional and psychological stresses should be avoided because it causes blood pressure. He advised the men that drink alcohol to drink two bottles of beer a week. He said excessive alcohol is predispose to elevated blood pressure.

On diabetes and much salt intake, he appealed to wives of members of ICCOBA 1997 set to try as much as possible to reduce the volume of salt put in their foods. He said much salt in the food has the tendency of increasing blood pressure.

“Diabetes elevated sugar levels. Diabetes are caused when somebody cannot manage the sugar levels in his/her body. Sugar is in the foods we eat.

“Most food we eat contain sugar, and it is the sugar in the foods that cause diabetes. Hypertension and diabetes are silent killer diseases,” Dr. Tobechukwu said.

He therefore groaned that, it is lack of vital and proper information about the illness they are suffering that make people to be suffering for the ailment or disease. He advised the partakers to get the relevant fact that would aid them, and begged them to often go to hospital to check the sugar levels in their body to avoid further consequences ahead.

Stating the essence of the occasion, the immediate past Coordinator General, Benin Recreational Club, Comrade Courage Osamwonuyi, said, they were able to withstand challenges that they encounter the preparation of the the programme.

He said: “My name is Osayi Osawonuyi Courage, Class of 1997 set, the immediate past Coordinator of this session. I was appointed as the interim government which I headed. Our end of the year get together party was lined up for this week. Usually, it suppose to be grace on the 18, of this month. But, our members and people who are in abroad or outside the country insisted it should be celebrated on Christmas Eve.”

Buttressing the guest speaker’s lecture, Senior Registrar, in the Department of Oral and Maxillofacial Surgery at the University of Benin Teaching Hospital ( UBTH), Dr. Jude Odiase, said the current research revealed that people between the age of 17 to 37 years are found to have hypertension because of the social life style.

Dr. Odiase explained that, most of the conditions that lead to high blood pressure is as a result of organs failure in the human body.

Highlights of the occasion was the presentation of trophy, award and gifts to winners and participants who distinguished themselves during the sports activities at the event. ICCOBA Football Team which emerged third position in the football competition got food items.

Alenkhe vows to quash quackery in journalism in Edo