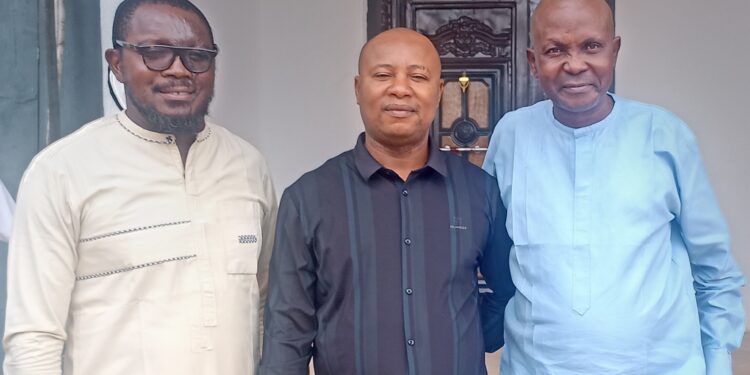 Comrade Simon Ebegbulem, Imo State Commissioner for Trade and Investment, has poured encomium on Comrade Festus Alenkhe, Chairman of the Edo State Council of the Nigeria Union of Journalists (NUJ) for his string of achievements within the short period of one year that he assumed office.

The Commissioner was speaking recently when he paid a condolence visit to Comrade Alenkhe over the demise of his Septugenarian mother, Mrs. Rose Akuogbe Alenkhe at the Council Secretariat Complex in Benin City.

Going down memory lane, Comrade Ebegbulem recalled that in the days of yore the Secretariat was nothing to write home about with the different chairmen who led the different excos not able to proffer solution.

“Those who are conversant with what (Edo State Council’s Secretariat of the) NUJ looks like in the past and visit now will agree with me that this place has taken on a new shape.”

Comrade Ebegbulem, who in his active days as a journalist in Edo State was at a period in time the Chairman of the Correspondent Chapel, went further, “Our Comrade is doing wonderfully well. When he was voted in a lot of us believed that he has the capacity to lead the people unlike in the past when we have chairmen who only know about their pocket.

“But today, we have a Chairman that believes that the central body needs to be reformed. Today, we are seeing the reforms. Thank you so much, Mr. Chairman.”

On the demise of Mrs. Rose Alenkhe, Ebegbulem said, “it was really sad for me when I heard about the death of your mum.”

He charged Comrade Alenkhe to take heart as his late mother left behind a good legacy with the birth of children who are doing well in life. He promised the bereaved Council Chairman his support and that of members of his Ministry in Imo State whenever the need arises.