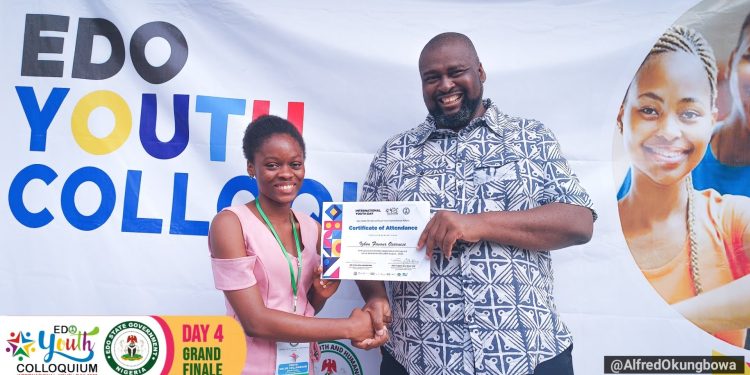 Edo State Government has said that the just concluded maiden Edo Youth Colloquium Boot camp in the state was organised to harness the capacity and utilise the strength of youths in the state towards the development of the society.

Mr Chris Osa Nehikhare, Honourable Commissioner for Youth and Humanitarian Affairs in the state, said this at the end of the boot camp which was part of the activities lined up by the state government in commemoration to the 2022 International Youth Day.

Nehikhare said that this the government had done by directly investing on the youths, adding that the empowerment of the youth was directly proportional to the growth of the society.

“This is one of the underlining rationales for organising the event and it is our belief that the beneficiaries will imbibe the necessary knowledge garnered that will enable them be positive change agents which will be reflective in both principle as well as character and become the culture among them.

He noted that the state government committed resources to the event believing that the expected return on the investment would be the impact to be made by the youths in the paths of life they chose to follow or the paths they chose to create.

“Whatever the case, I urge you to leave indelible footprints that will be a legacy for your generation and a memorial for the generations coming after you. It is our hope that leaders will emerge from this event and become ambassadors of the new narrative that we seek to instil in today’s youths,” the Commissioner said.

Nehikhare explained that the objective of the Colloquium/Boot Camp was to drive and instil key universal values on youths and young people of the state so that their actions would be realigned to more positive productive ventures in their chosen career paths.

He added that in view of this, the event was structured in a way that resource persons from various field and sectors of the economy were brought in to speak to participants on diverse topics.

The three day boot camp held at the College of Education campus in Abudu, Orhionmwon Local Government Area of the state. The Commissioner and members of staff of the Ministry and some of its linkage agencies camped with the 200 participants.