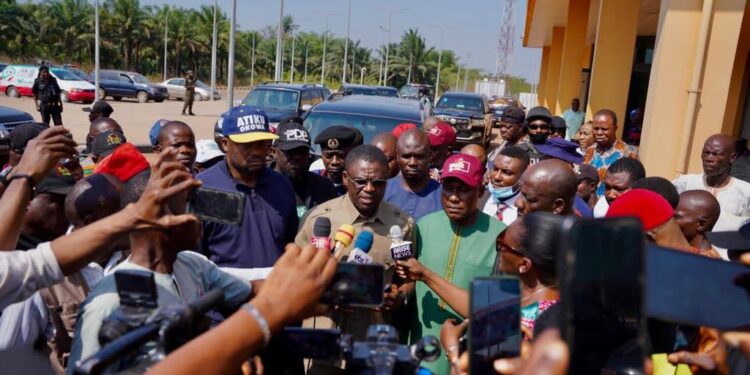 Edo State Deputy Governor, Rt. Hon. Comrade Philip Shaibu, has said the government is strengthening security to check crime and criminality, vowing that the Governor Godwin Obaseki-led administration will make the state unsafe for kidnappers and other criminal elements to thrive.

Shaibu disclosed this after a meeting with heads of security agencies and community leaders at the Igueben Railway Station in Igueben Local Government Area of the state on Tuesday.

The deputy governor was joined at the meeting by other top government officials, including the Senator representing Edo Central Senatorial District, Senator. Clifford Ordia and the Speaker, Edo State House of Assembly, Rt. Hon. Marcus Onobun.

Shaibu, who called for calm among residents of Igueben LGA, urged members of the public to provide useful information that will aid rescue efforts by security agencies.

He said, “We were here on Sunday for a fact finding mission and today, we are here again to give moral support to our security troops on ground and also have another discussion to review all our activities since this kidnapping incident happened and to see areas to improve on.

“The important point is that more persons have been rescued and the numbers are reducing. Our target is for everybody to be released. We want to thank the security agencies for their efforts in ensuring all captured are released. I appreciate the Inspector General of Police, Chief of Air Staff and the Chief of Army Staff for all their efforts in ensuring those kidnapped are rescued unhurt.”

Shaibu added, “We are doing all to ensure we get these people out. The Governor has asked us to give morale boost to troops on ground and also review our security strategy.”

He further noted, “The state government has not been reached for ransom. Edo will be too hot for these people as they will never have any base here in the state. We have worked hard and will continue to work hard to ensure the state is safe. The pressure is on the kidnappers and the victims are being freed daily.”

On his part, the Edo State Police Public Relations Officer, Chidi Nwabuzor, at a press briefing in Benin City, said another victim of the train station attack has been rescued and released to the family, bringing the total number of those rescued to seven.