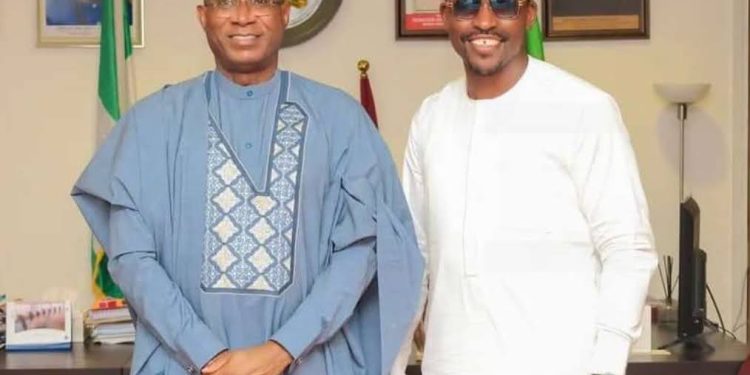 According to the statement the group which consists of core believers and supporters of President Muhammadu Buhari’s administration, said it has thrown its weight behind the Omo-Agege/Osanebi governorship ticket. It also assured that as a grassroots based organisation, with membership made up of ex-agitators including progressive-minded stakeholders, with structures across the nine states of the Niger Delta region it has unanimously endorsed the deputy governorship candidate slot of the former Deputy Speaker of Delta State House of of Assembly. The group express optimism that the duo are men of integrity with impaccable track record of good governance that will change the narrative come 2023.

The statement reads in part, “The leadership of Niger Delta APC Youth Vanguard who are core believers and supporters of President Muhammadu Buhari-led administration, which is made up of ex-agitators with progressive stakeholders of like minds and coordinators cut across the nine states of the Niger Delta region unanimously congratulate the emergence of Rt. Hon. Friday Ossai Osanebi, the former Deputy Speaker of Delta State House of Assembly as running mate to Senator Ovie Omo-Agege, standard bearer of of the All Progressives Congress(APC) in Delta State for 2023 governorship election.

“Rt. Hon. Osanebi is a young man of integrity with unblemished track record. As pioneer President Of Ndokwa Youth Council(NYC) who work hard to bring about community development with employment opportunities to the youths of Ndokwa nation by engaging most of the multinational oil companies in the Ndokwa domain such as Agip, Saipem, Sterling Global Oil Company and others making sure all MoUs agreements towards community development was adequately approved. He is a young man that is well accepted by all youth groups, women the elderly and the traditional rulers in the entire Delta North Senatorial District. He is a round peg in a round hole and has all it takes to be a competent deputy governor based on his antecedents as a lawmaker, a well established business enterpreneur, a loyal party stakeholder and a dedicated family man. His unparalleled effective representation of his constituency while he was Deputy Speaker of Delta State House of Assembly is unquestionable.

“We really commend the wisdom of Senator Ovie Omo-Agege, Deputy Senate President and the leadership of Delta State APC for picking Hon. Osanebi as the running mate. It is an indication of Senator Omo-Agege’s foresight and patriotism to render effective service to Deltans base on his in-depth developmental agenda, which is a game changer for the socio-economic lives of Deltans and to rescue Deltans from the shackles of extremely corrupt and bad leadership provided by Okowa-led administration for devastating seven years plus that have left Deltans in a precarious situation of hopelessness of no visible infrastructure or meaningful development as their predicament is now frightening.

“The lofty and people oriented agenda of Senator Omo-Agege christened Build A New Delta (BAND) on the four pillars of Employment and Empowerment, Development, Good Governance and Enduring Peace and Security (EDGE), and Rt. Hon. Friday Osanebi is the best person to join hands with Omo-Agege to drive this laudable great plan of four pillars project from 2023 in other to give hope back to Deltans as their hopes have been dashed by the bad, corrupt maladministration of people’s Demonizing Party led by Dr Ifeanyi Okowa.”

Meanwhile, the group promised to mobilize youths and women to ensure victory of the APC in Delta State, and disclosed that work is on already on across the local governments and wards of the state to reach out to the electorates ahead of 2023.

“We want the great people of Delta State to understand that Omo-Agege/Osanebi ticket is divine because we see the hand of God in it, and the reason is because there was wild jubilation and celebration across the entire state, most especially, the Delta North Senatorial District and across all the ethnic nationalities.”