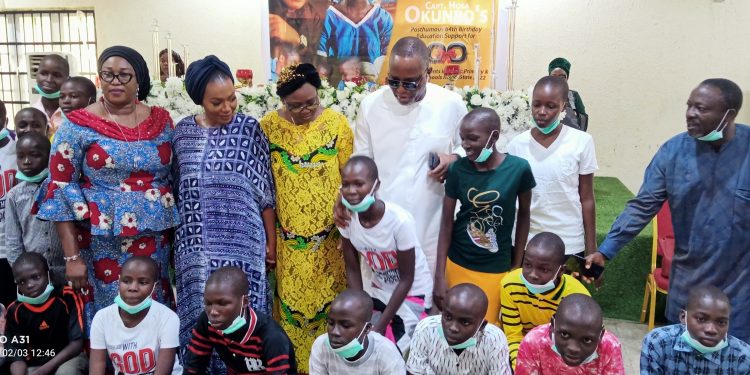 Olori Atuwatse 111, Queen of Warri, has challenged children not to let their parents social status to hold them back from achieving success in life.

According to her if her late father, Captain Idahosa Wells Okunbor(aka Captain Hosa), can rise from the shadows of an indigent background to become a success story then any child with a similar background can even do much better than the late philantropist.

She was speaking on the occasion of the late philantropist’s family giving scholarship awards to 100 indigent pupils in Benin to mark his post humous birthday.

Appreciating school teachers and principals, the Queen said: “Thank you for what you are doing in this state. Well done and may the Lord continue to empower you and give you grace to do well for the future generation.

“I like to commend and welcome the principals of various schools here represented. Thank you for what you do. Thanking you for standing.

“In the Nigeria that we have now being a principal is not as rewarding at least monetarily, as elsewhere in the world. So, I want to say thank you for the sacrifice, thank you for the labour of love. Showing up every day, impacting and investing in the children.”

To the children, Olori Atuwatse describe their future as bright and admonished them not to despair because of their parents social status.

She affirmed that her late father was brought up in Benin by parents who were not moneybags but he grew up to be a success story.

A hundred indigent pupils from schools in Benin benefitted from the scholarship award which amounted to close to N9 million.