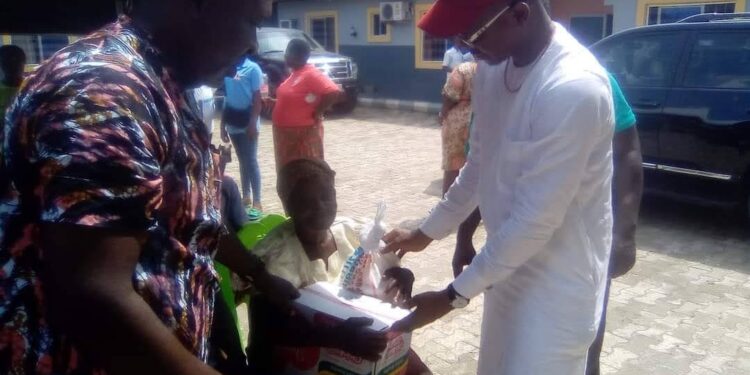 The Capoons represented by Capoon of the Benin City Metropolitan Chapter,   Chief(Dr.) Chris Ekiyor, in an address, introduced the association to the people of the local government area and explained what they stand for.

“National Association of Seadogs(NAS) is a body that believes in impacting positively on society by giving supporting hands and encouragement whenever the need arises.

“We are aware of the immediate effect of the perennial flooding that affected the people of Patani LGA and the after effects also. On this note, the NAS in celebration of their 70 years anniversary, decided to give food items to the people and medications to RAHI Medical Outreach as a way of identifying with the challenges of the people caused by flood.”

The people, in their excitement, thanked the association for their kind gesture and prayed to God to continue to bless and protect them from all evil and calamity.

Mr. Austin Isawhe, a senior member of the association, in his address, also encouraged the people to always pray for their son, Dr. Chris Ekiyor, that God should continue to bless him with long life, good health and wisdom, cause it is because of Dr. Chris’ global outreach   that his friends were  convinced to intervene around Patani and environs throughout the flood.

The oldest man, who responded on behalf of the men in the community, also thanked the association and prayed to God to continue to give them the wisdom to keep doing good. The elderly women sang and danced in excitement for the gifts.