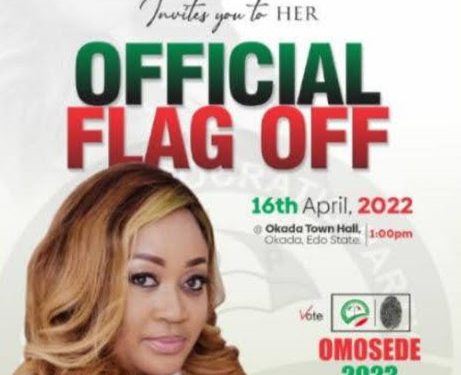 Honourable Gabriella Omosede Igbinedion has declared her intention to represent Ovia North East and Ovia South West Federal Constituency the second time in the House of Representatives under the banner of the Peoples Democratic Party (PDP).

She made her declaration known during the flag off ceremony held last Saturday at Okada Town Hall, Okada, Ovia North East Local Government Area of Edo State amidst encomium and backslapping by the mammoth crowd who vowed that she have their support.

While appreciating the party’s support in 2015, and soliciting for more, she said she is the only person contesting that has legislative experience, adding that, there should be reward for loyalty as she has remained a loyal member of the party.

On the invasion of some of the localities in the local government area by killer herdsmen, Omosede said as a resounding voice in the house of representatives all she needs to put an end to insecurity is to table the issue before her colleagues in the national assembly for consideration.

She stressed that she will champion women’s rights, while women’s bills will be passed if there are more women representatives in the house of representatives to help achieve it.

Some decampees, mainly from the All Progressives Congress(APC), were welcomed to the PDP and issued the party’s membership cards as they tore their APC cards.

One of them, Inaede Patrick, from Okada West Ward one, said he was decamping from the APC to the PDP because the former performed below expectations.

The grand event was attended by PDP stalwarts, PDP delegates and representatives of the different ethnic groups in the locality.