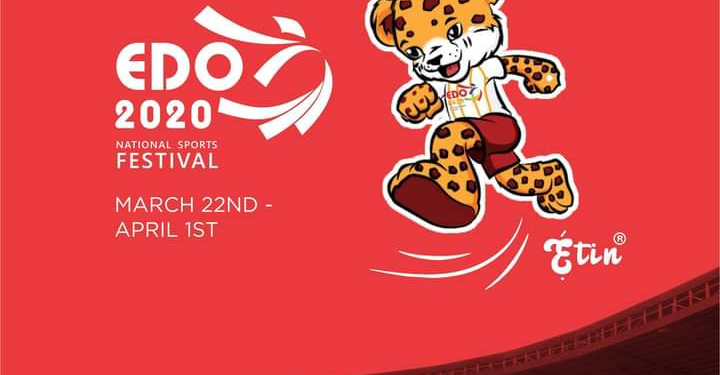 The desperation by some powerful individuals to force the Edo State Government to host the 20th National Sports Festival(NSF) before the end of this year is stiffling. Stakeholders are asking very germaine questions on what is really behind the desperation.

Recall that the festival would have held many months back but for the Covid-19 pandemic which necessitated its postponement until the situation is back to normal.

As it is now there is a mad rush by some elements to ensure that the festival hold this year Covid-19 pandemic or not. Today(Monday, November 16th, 2020) a part of the ultra-modern Samuel Ogbemudia Stadium in Benin was filled(with no regard to the Covid-19 pandemic protocol of social distancing and wearing of face mask) with athletes, coaches and sports secretaries who had been invited to the meeting under the pretence that they would have a meeting with the contractors handling the stadium project and air their complain about some substandard sports equipment to be used during the National Sports Festival in Benin.

Our inside source in the gathering said that barely had the invitees sat down for the meeting to commence when the organisers of the meeting started reading the roll call of the athletes, sports officials and coaches. This was done, we learnt, to get an accurate list of those getting prepared for the festival with a threat that those absent would face sanctions.

Some influential individuals have been mounting so much pressure on the sports community that the National Sports Festival must hold in Edo State this year. It would be recalled that the Minister of Sports, Sunday Dare, had endorsed a message that a committee should be set up to harmonise, brainstorm and come up with a date for the festival to hold.

Going further, the minister added a proviso that whatever the recommendation of the committee it is subject to ratification which means that the PTF on Covid-19 will have to give a go ahead for the sports festival to be held which President Muhammadu Buhari would then endorse.

That aspect of the endorsement by the PTF on Covid-19 has not been done. What we are faced with now is that a date has been hurriedly fixed for the commencement of the festival with the Games Village sited at the Ugbowo Campus of the University of Benin slated to be opened on Thursday, December 3rd, 2020.

Also the Minister of Sports said that if the sports festival will be held then states will be given ample time, like a month or two, for preparation. This, from simple logic and calculation, means that the earliest time for the National Sports Festival to start should be mid-January 2021. So, this mad rush to start the festival before the end of this year is startling. Who is really behind the mad rush or who stands to lose if the festival is not held this year?

Recently, you will recall that Governor Godwin Obaseki, in his quest to enable the people of the state take part in his second tenure inauguration celebration, had made a pronouncement that the gates of the Samuel Ogbemudia Stadium would be opened at no extra charges to enable football fans to cheer the Super Eagles in their AFCON 2021 qualifier match up with the Leone Stars of Sierra Leone.

This was immediately countered by a message from the office of the chairman of the PTF on Covid-19, Boss Mustapha, who is also the Secretary to the Government of the Federation(SGF), that the facility must not be filled with fans. Rather, the PTF insisted that those that should be allowed into the stadium that day are match officials, officials of the two national teams and their players with a few dignitaries.

So, how the Edo State Government is going to cope with handling the issue of social distancing by the thousands of delegates from the 36 states of the federation who will be taking part in the sports festival and the large number of sports fans that would be at the venue of the different events remains to be seen.

Another issue that needs to be addressed before the commencement of the festival as it is now, is the security challenge that Edo State is facing presently whereby hoodlums openly attack people, shot at them and make away with anything that catches their fancy in broad daylight.

Moreover, the Ugbowo axis of the city of Benin where the Games Village is situated is known as one of the epicentres of the current show of strength by criminals and cult groups who have a free reign of killing on a daily basis. What are the measures that have been put in place to tackle this security challenge?

The federal government should step into this issue in time and bring in sanity. Care should be taken not to put lives in danger because of some people’s inordinate ambition. History tells us that the 1972 summer Olympics in Munich, which was officially known as the Games of the 20th Olympiad, was overshadowed by the Munich massacre in which eleven Israeli athletes and coaches plus a German police officer were killed in a terrorist attack by a Palestinian group, Black September all because security was breached.

A ‘word’ for Chief DSP Alamieyeisigha, today on his 68th posthumous birthday

A 'word' for Chief DSP Alamieyeisigha, today on his 68th posthumous birthday