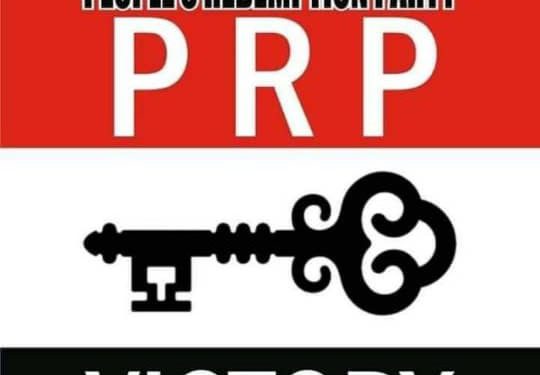 The executives of People’s Redemption Party (PRP) in Edo State led by the Chairman, Dr Greg lgbinomwanhia has embarked on massive membership drive across the state.

The chairman spoke to the people reassuring them that they should not be discouraged with the current happenings in Nigeria now and that the PRP is a people-oriented masses party which welcomes all Nigerian citizens regardless of religion, ethnicity, race and creed, who share a common values and orientation of the party on how to better the lives of the common Nigerian man.

He stressed further that PRP is a democratic party “of the people, for the people and by the people”, he also went further to explain that the party is not a new party as people claim it to be in this part of Nigeria and that it is one of the oldest parties in Nigeria but well grounded in the Northern part but with the intention of having a strong membership base in other parts of Nigeria.

He mentioned one of the founding members of the party, Alhaji Balarabe Musa and his contributions to the growth of the party. He went further to encourage all present at the meeting to aggressively go on membership drive by preaching about all the good plans the party has for Nigerians and to give it a chance in Edo State and Nigeria in general.

Some new members who joined the party were given opportunity to make one or two comment. They explained that they are tired of the two dominant parties in Nigeria the APC and PDP. And they need a change that is why they are embracing the PRP as a better alternative party that will bring the much needed change Nigerians desire. They also promised to convince other Nigerians to join the party.

Responding the LGA chairmen, Kenneth Oni(Esan Central) and Desmond Omokhegbe(lgueben) assured that they will do their very best in the area of membership drive through continuous sensitization of all for a better alternative party like the PRP.

At Ovia North East Local Government Area Dr lgbinomwanhia who harped on the need for a real change to happen in Nigeria explained further that the current change being experienced by Nigerians now is not the expected change Nigerians desire and have being longing for.

He stressed further that PRP is that better alternative party to bring that change which should be preached to all Nigerians. He encouraged all excos and members to go all out for membership drive to boost the membership strength of the party in Edo State.

A chieftain of the party, Abuowande Ojo, promised a positive result in the area of membership drive.

Rotaract Club of Uniben calls for peace all over the world

Rotaract Club of Uniben calls for peace all over the world