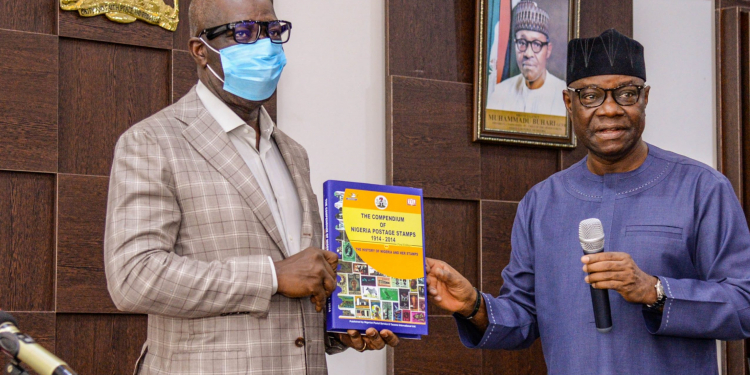 Edo State Governor, Mr. Godwin Obaseki, has said his government will partner with the Nigeria Postal Service (NIPOST) for the release of a commemorative stamp to mark the state’s 30 years anniversary in August.

Obaseki said this when he received the leadership of NIPOST led by the Postmaster General, Dr. Adebayo Adewusi, who were on a courtesy visit at the Government House, Benin City.

According to him, “Edo State will be 30 years in August and we have focused on culture as the basis for our resurgence and renewal in my second term.

“So, we will be very excited to partner with you to see how we can create some commemorative stamps and link those stamps to our arts and our culture.”

The governor continued: “I am very sure that there is a lot we should be able to do together. The first step has just been taken; I am very happy and pleased with the energy I see with your management, particularly your zone in Edo.

“That is quite impressive; seeing such an energy being exuded by the management alone is enough encouragement to sit and work with you. Rest assured of our support as a government to work with you always,” he added.

Obaseki identified NIPOST as the worst-hit by modern-day technology, adding that the culture of letter writing and literature has now changed.

Earlier, Adewusi congratulated the governor on his victory in the September 19 gubernatorial election in the state, adding: “We have a lot of prospects and I believe we can work and leverage on with your administration’s strides for better partnership within your government and the postal services.

“We have a very huge facility that could be used to house athletes during the National Sports Festival (NSF), which again has been postponed to April; all things being equal, our facilities are ready for use for housing the athletes.”