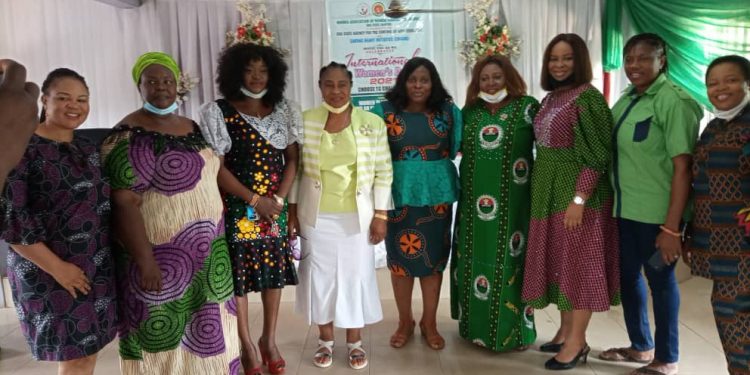 Chairperson Nigeria Association of Women Journalists (NAWOJ) Edo State, Comrade Adesuwa Ehimuan, has said that women must be given the opportunity to play her full role in shaping the pivotal decisions being made right now as countries respond to the recovery and second  wave of COVID -19.

According to her,  “For many people, the role of women is limited to household chores only. However,this need to change as women deserves equal freedom and opportunities in everything like men. The world is moving towards gender equality. It is moving towards a balance between men and women.”

Adesuwa Ehimuan thanked all the guests for gracing the International Women Day and  those who parterned with NAWOJ Edo State as equal voice is given to all.

Executive Director,  Edo State Agency for the Control of Aids (EDOSACA), Mrs Flora Oyakhilome representated Mr Ikponmwosa Adabonyin in an address said women should be celebrated everyday and equal voice should be given to them in the society.

One of the key note speakers, Dr Nosa Aladeselu, who was represented by Mrs Louis Aghonkhaese, said women are worth celebrating  stressing that women  put in  lots of effort and must be given the opportunity to fully express their full potentials.

She called for the abolition of the word full time house-wife as women are good managers of time adding that the gap between the male and female be closed.

Former Special Adviser on Gender Issues to Edo State Governor, Ms. Efosa Uyigue, called for an end to gender violence in the face of Covid-19  and asked for equal up bringing of the male and female children while heart broken women should be allowed to speak out so  the women can feel safe at home.

Also former Edo State House of Assembly Speaker,  Mrs Elizabeth Ativie, challenged women to make a change and put hand in hand and work together to achieve higher positions at the government level.

Mrs Sabina Idowu Osehobo said women need the mandate of all to get to political offices, adding that everyone has a role to play as such,  women should come together to achieve this purpose.

The chairman, Nigeria Union of Journalists (NUJ), Sir Roland Osakue, said that women should be given their right places in the society and called for an end to intimidation by men.

On her part,  the General Manager, Bronze FM, Mrs Abimbola Oyetunde, called for more support for each other by women. She emphasised that  women have all it takes to change the narrative.  “Women in different organizations have been known to achieve great results as they are goal getters.

Another Keynote Speaker, Hon. Steven Happiness Odochi, said for us to have a secured society, we must have a secured home. She called on parents, guardians and caregivers to take proper care of their children irrespective of the gender.