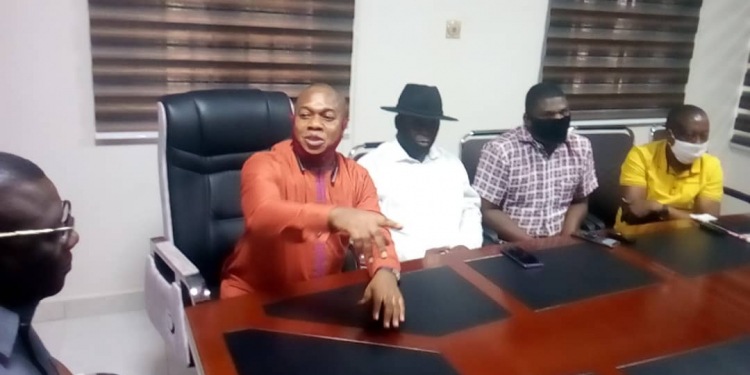 Chairman of the Nigeria Union of Journalists (NUJ), Delta State Council, Comrade Michael Ikeogwu, has enjoined wealthy Nigerians to stem the tide of capital flight by investing their money in businesses in the country.

Comrade Ikeogwu gave the advice when he led members of the Executives of the NUJ Delta State Council on a courtesy visit to a multi sectoral business man, Engr. Marvis Odioko, in his office in Asaba as part of the Council’s latest initiative to engage business minded individuals to partner the Council to enable it carry out some of its planned programmes.

Ikeogwu eulogized the sterling leadership prowess and motivational charisma of Engr. Odioko who had engaged over 176 staff in his employ with business focus in civil engineering, water factory, real estate, hospitality business, oil and gas and more.

The labour leader commended the business mogul for investing heavily in various sectors of the economy and creating thousands of employment opportunities for the teeming youths in the state and beyond, adding that Nigerians, particularly those in diaspora, should emulate the positive drives of Engr. Odioko by coming home to grow the economy through investments in the country.

According to Ikeogwu, “The insecurity in the country is an indication that people are not productively engaged. I want to commend you for your initiative to take some of our youths off the streets by creating jobs for them.

“You are a rich man with a heart of gold. Not too many rich people have the passion to give back to society, but in your own case, you are not only sponsoring so many less privileged persons in schools but also paying salaries to over 30 widows every month.

“We recognise what you are doing, that is why we are here to encourage you the more. And part of our partnership plan with you is to regularly patronise your hotel whenever we have visitors in town, but it must be at discounted rates. We will also need to tell your good stories so that other well meaning Nigerians will emulate your kind gestures.”

Responding, Engr. Odioko stated that he derives joy making positive impact in people’s lives. He said he became a man at the age of 14 when he lost his father, revealing that he struggled to grow up.

His words, “I told God to use me to stand for those that cannot stand for themselves. That is why I will always be a positive influence to anybody I come in contact with.”

Speaking further, he eulogized his wife for being the pillar of his success. He said he would continue to respect her for standing with him when he was a nobody until now that he has become somebody.

He assured NUJ of his partnership in any areas so requested, stating that the media is indispensable and cannot be disregarded.

Engr.Odioko thanked Comrade Ikeogwu for the visit, saying that whatever he was doing to put smiles on the faces of people around him was borne out of his innate love to uplift humanity at every given opportunity.

On Comrade Ikeogwu’s train were the council Vice Chairman, Comrade Salvation Ogono; the Secretary, Comrade Patrick Ochei; the Auditor, Comrade Celestine Aforkoba and the Ex-officio 2, Comrade Emeka Chukwujindu. Others were Comrade Andy Adaigbe, Vice Chairman of the Ika Correspondents Chapel of the union, Publisher of the Flagnews and CEO of Miramas Hotel, Agbor and the Director of Communications to the Chairman of the union, Comrade Johnson Ebigide.

How street urchins, security personnel and others hijacked Philip Shaibu’s yearly media get together