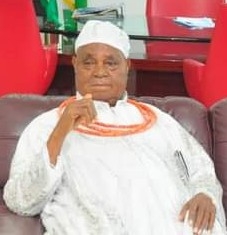 A big moment it was recently when Nollywood A list star, Sam Dede for the second time in 35 years met the Esama of Benin Kingdom, High Chief Gabriel Osawaru Igbinedion.

Chief Igbinedion whose Kada Entertainment Centre along Sapele Road and his expansive estate in GRA, Benin were used as locations for the movies production got to hear about Sam Dede’s joyous moment and offered to host him and the members of the crew and cast.

In the course of the merriment Sam Dede recalled the incidence of th first time he ever met the multimillionaire in 1985 while still a student of the University of Benin when the high chief gave him a large sum of money as reward for his very commendable performance in the gods are not to blame.

Meanwhile, Benin City is presently agog with the presence of some A list movies stars like Jide Kosoko, Sam Dede, Ini Edo, Ebele Okaro, Junior Pope, Zubby Michael, Brother Shaggi, Angela Eguavoen and some Benin based thespians like Ejehi Ejodamen on location for Lancelot Imasuen’s latest offering in the works.

Efforts by Popular News to get more details of the new project from Lancelot who during Nigeria’s 60th independence anniversary  was honoured as one of the sixty icons that shaped Nollywood, was hampered as a result of his very busy schedule on location.

Why I am opposing Umahi, says former aide