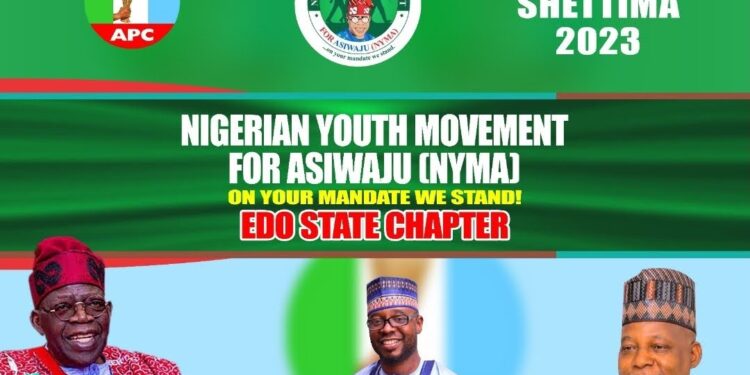 Comrade Ogbodu Peter, Coordinator of the Edo State Chapter of the Nigerian Youth Movement for Asiwaju/Shettima (NYMA), has stated that the group, one of the several such groups canvassing for support for the aspiration of the All Progressives Congress (APC) standard bearer, Asiwaju Bola Ahmed Tinubu and his running mate, Alhaji Kashim Shettima in the forthcoming Presidential Poll, will through hardwork be able to garner massive votes.

In a chat, Ogbodu said: “We, the Edo State Chapter of the NYMA, although we are just starting barely two months now, have been able to set in place a 21 members Exco for which everyone is a voting member for our Candidate and his Vice; grow the group to fifty members of voting persons including the exco members within four days after we were formed and currently, as a result of the desire for the group to succeed, each of the close to fifty members have been mandated to canvass a minimum of ten voters each who will cast their votes for  Tinubu/Shettima on the day of the election and this has within this period of two months, grown our members close to 600 of which we are sure of their commitments to our candidate, AsiwajuTinubu/Shettima and indeed other candidates of the party in subsequent polls.

“Going forward, we have started gradually to build our very formidable structures across the eighteen local government areas of Edo State.

“All our members have their PVCs already such that if the  elections are slated for tomorrow we are all good to go and exercise our civic responsibilities to vote massively for the APC candidates all the way.”

He disclosed that “within days of inception of the Edo State Chapter of NYMA,
State exco of the APC and PCC led respectively by Col. David Imuse (rtd) and Chief Lucky Imasuen have recognized us and both have given assurances of their support for the group.”

On the the party’s Presidential Campaign rally coming up on Thursday, January 5th, 2023, Ogbodu disclosed: “For the APC rally on Thursday, January 5th, 2023, to be held at the University of Benin Sports Complex inside the Ugbowo Campus we have already sensitized our members on how everyone is expected to be on ground and we will not be less than at least 500 persons clad in the group’s colourful regalia.

“Everyone at the programme should watchout for us as we intend to make a generational statement at the event with our presentation. You definitely can’t miss us.”