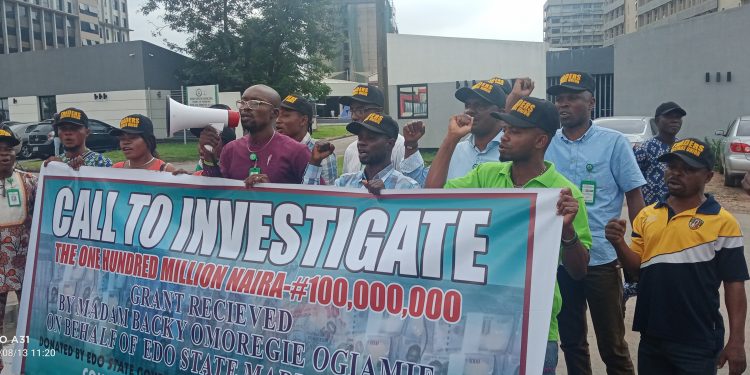 President of the Traders Welfare Union Nigeria(TWUN), Comrade Lucky Orukpe, has petitioned the Economic and Financial Crimes Commission(EFCC), Independent Corrupt Practices and other related Commission(ICPC) and other security agencies on alleged diversion of N100million grant for market women by Madam Blacky Omoregie Ogiamen.

He asserted that the grant was released to Madam Ogiamen on behalf of the market women in Edo State.

Going further, he affirmed “I have made series of investigation for the past eight years to know the beneficiaries of this grant in the evening eighteen local government areas of Edo State yet I have not find a single market woman who did received the grant.”

He stressed that he strongly believes that “the said grant was mismanaged and embezzled by Madam Blacky Ogiamen who received Edo market women grant meant to better the lives of Edo market women in the state in 2013.”

Comrade Orukpe charged the security agencies and other relevant stakeholders to “ask for the full statement of account of all the Edo market women who are beneficiaries of the grant from Madam Blacky Ogiamen.”