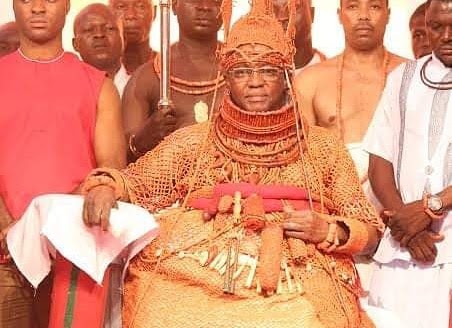 He made the commendation when he played host to
the Minister of Interior, Ogbeni Rauf Aregbesola, in his Palace in Benin City, Edo State capital.

Oba Ewuare II acknowledged the efforts of the Federal Government led by President Mohammadu Buhari to set up a center for enhanced e-passport production in the state, saying it would address the difficulties faced by applicants in Edo and Delta States. The monarch reaffirmed that his Palace would do everything within its powers to support and pray for President Buhari for developmental strides in Edo State.

Earlier on his part, Ogbeni Rauf Aregbesola told monarch that he was in Benin City to launch a production center for enhanced “E” International passports as directed by President Buhari.

According to the Interior Minister, the production center would adequately address the bureaucratic and other difficulties experienced by hundreds of applicants, especially across Edo and Delta States.

Ogbeni Aregboshola, who was accompanied to the Palace by top officials of Immigration, Correctional Service, and other para-military agencies,
assured Nigerians that several pending applications for international passports would be processed with the new improved enhanced system within the next two weeks.

The Interior Minister, therefore, urged Nigerians to desist from patronizing unscrupulous middlemen to get international passports as the new process is easy and free to apply.

Group appreciates Obaseki's leadership in the fight against terrorism, kidnapping