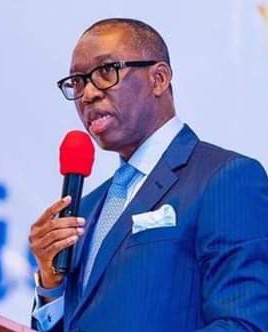 Engr. Daniel Ossai, the Secretary of the Delta State chapter of the Peoples Democratic Party (PDP) has described the state governor, Dr. Ifeanyi Okowa, who is the running mate of the party presidential candidate in the 2023 general elections, Alhaji Atiku Abubakar, a man of destiny. Ossai spoke with our Correspondent during a stopover in Benin.

According to Ossai, Governor Okowa over time has shown that he is a man who has all it takes to impact positively on the lives of people. He made a review of the political trajectory of Governor Okowa and came up with the verdict that nothing can be said to rubbish his track records of achievements in all the assignments that has been given to him either as a career medical doctor or a politician.

“For the several years that Dr. Okowa has served the public either as a medical doctor or as a politician he has performed so creditably that nothing can be devishly deployed to rubbish his achievements.

“Now that his nearing the completion of his second tenure as a governor and he is gearing up to assume office as the Vice President in 2023 the biggest contribution that can be made to his desire to continue his good deeds at the centre is to put in prayers that he is guided by God in whatever he is doing.”

Engr. Ossai asserted that Dr. Okowa’s emergence as the Vice President in 2023 “would be a huge blessing to humanity as he will be in pole position to add value to governance as the PDP do the needful to turn the fortune of Nigeria on the right path after the eight years of the locust of the All Progressives Congress (APC) reign whereby the standard of living of citizens plummeted to the lowest ebb ever.”

Ossai described Governor Okowa as an achiever whose footprint in his over 7 years so far in office has fetched Delta State some legacy projects in all the senatorial districts of the state which include but is not limited to Issele-Uku Main Access Road from Benin/Asaba Federal Highway with an Extension to Obi Palace Junction to Market Road, in Issele-Uku Town, Aniocha North LGA-Aniocha North; Construction of Okpe-Olomu/Umolo Road; Phase I: from Okpe-Olomu to Olomu Secondary School, Otorere-Ughelli South and Construction of Uduophori (Bomadi/Ohoro Junction)/Toru-Angiama/Toru-Apelebiri/Patani Road (Phase II) in Patani L.G.A.- Patani among several others.

“Nigerians cannot afford to lose this golden opportunity of Governor Okowa teeming up with his Principal to bring back our lost glory and restore our pride in the league of nations.”

Philanthropist brings smiles to the faces of destitutes, others